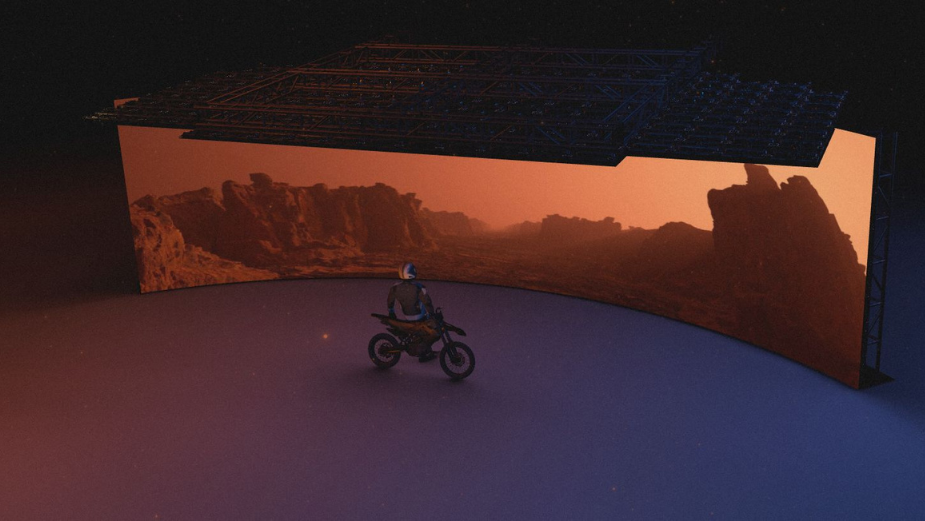 Virtual production has, over the past few months and years, been a topic bouncing off the industry’s collective lips with abandon. And yet, although more and more of us are familiar with the term, the scale, complexity, and potential of the new tech has meant that we’ve yet to settle on a shared language for discussing it.

For those companies who have invested heavily in virtual production, that’s a challenge. Gesturing towards Disney’s The Mandalorian is at this point an industry cliché and, whilst a strong example of the technology in action, doesn’t reflect its dizzying diversity and depth of its potential.

Arc Studios, the cutting-edge virtual production studio based out of Nashville, took that challenge as an opportunity. In designing their new website, the company sought to communicate - visually as much as linguistically - the value of virtual production. In doing so, they’ve managed to elegantly and simply depict the technology in a way that in equal parts understandable and exciting. You can check out the site for yourself, here.

The story told by the new website is that of virtual production’s utility and transformative power. In the process of telling it, Arc Studios alighted on how the tech is helping them to create powerful content more efficiently - and also why the creative industries are at the starting point of a tech-driven production revolution.

The Language of Revolution

“We’d already seen a lot of other virtual production studios sites and how they did it - we wanted to do something different”.

From the outset, Adam and the team at Arc Studios knew they wanted to add another dimension to the industry’s evolving understanding of virtual production. “The value of what we do is very cutting edge and forward thinking”, continues Adam, “and we wanted the website to reflect that”.

For all the pre-existing talk in the industry, the team also knew that they’d have to answer some ground floor-level questions. “It’s a hard concept to explain - can you even define what virtual production is in a sentence?”, notes Kirk. “​​Being able to encapsulate that via a web presence was a challenge - so we did our best to show people the endless possibilities of the virtual production world, and provide a unique experience while you're viewing it remotely”.

The landing page of the site, an elegant 3D scroll past a recreation of the beautiful LED wall housed within the Nashville-based studio, greets first-time visitors. Putting that together, as Charles explains, was no easy feat. “This project required the expertise of several talented people”, he says. “Once we had developed the overall concept, we worked with Cody Garrow and his team at Knitted City to develop a beautiful 3D sequence, then we collaborated with the team at Salt & Pepper to translate the sequence into a usable online experience. We also worked with Good People Digital, to help produce copy throughout the site that would communicate Arc Studios’ story in a clear and digestible way”.

Arc’s offering, however, goes beyond the sheer equipment seen on the site’s splash page. Crucially, the studio draws upon expertise to allow its clients and partners to make the most out of the tech on offer. “The value we bring at Arc Studios is that we have an entire holistic team in place that can support you throughout any production”, explains Adam.

Already, the studio is able to point towards standout projects which show the tech at its best. “Kelsea Ballerini and her team shot four music videos in one day using our space, which is a huge testament to how seamless the process can truly be”, says Kirk.

“On top of that you’ve also got projects like Defy the Odds, where we created an office cubicle setting, and then also used the volume for a lot of the interior shots”, recalls Adam. “There’s one particular scene set in a car which I think is a really cool use of the volume”.

Looking to the future, things start to look even more interesting for Arc and virtual production alike. “What’s exciting for us is that we’re in talks for a variety of projects involving web3 and the metaverse”, says Adam. “That’s a route we’re exploring, and we have some eye-catching projects coming up”.

Striking a note of agreement, Kirk points out that “what we constantly need to keep in mind is that we are on a journey with this tech and these capabilities - the truth is that we don’t entirely know what’s possible just yet.

“I see it as being very much in a similar place to Unreal Engine, in that there are constant new evolutions which force us to adjust what’s possible”, he continues. “This is happening on an almost monthly basis - it’s a tremendously exciting time for production”.

‘Exciting’, then, seems to be the operative word when it comes to virtual production. Whilst, as Arc Studios’ new site demonstrates, great strides have already been made, the possibilities for the future in terms of both quality and efficiency are even greater.

Increasingly, there’s a sense that the industry is only just scratching the surface of something extraordinary.